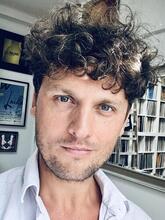 CCS Faculty Fellow Dominik Bartmanski has been awarded a very competitive Heisenberg Fellowship. This is a prestigious award granted by the German Research Foundation to scholars of exceptional merit who hold a habilitation degree (=”2nd, higher PhD project”). It is a 5-year-long pure research position that the awarded scientist can attach institutionally to their university of choice. Dominik will be affiliated with Professor Andreas Reckwitz at Humboldt University in Berlin.  He will be researching on the way ‘culture’ impacted social theory in Germany and the USA; and also a more empirical project on the cultural trauma of lockdown in various cities.

Dominik’s Ph.D. work was influenced by the  ’iconic turn’ of Jeffrey Alexander and Bernd Giesen, with whom he co-edited a much-cited volume.  Completed at Yale in 2011 the PhD concerned the end of communism in Europe, looking in particular at the meanings of the fall of the Berlin Wall and the ‘Round Table’ in Poland. A revised version entitled “Matters of Revolution: Urban Spaces and Symbolic Politics in Berlin and Warsaw After 1989” will appear with Routledge next year.

Dominik has been living in Berlin for several years. His other work since graduation has concerned a range of themes in social theory, iconicity, technology, nostalgia and music sociology. His books and papers with CCS Faculty Fellow Ian Woodward on the revival and meaning of vinyl records were ahead of the curve in picking up on the trend and so are particularly well known.